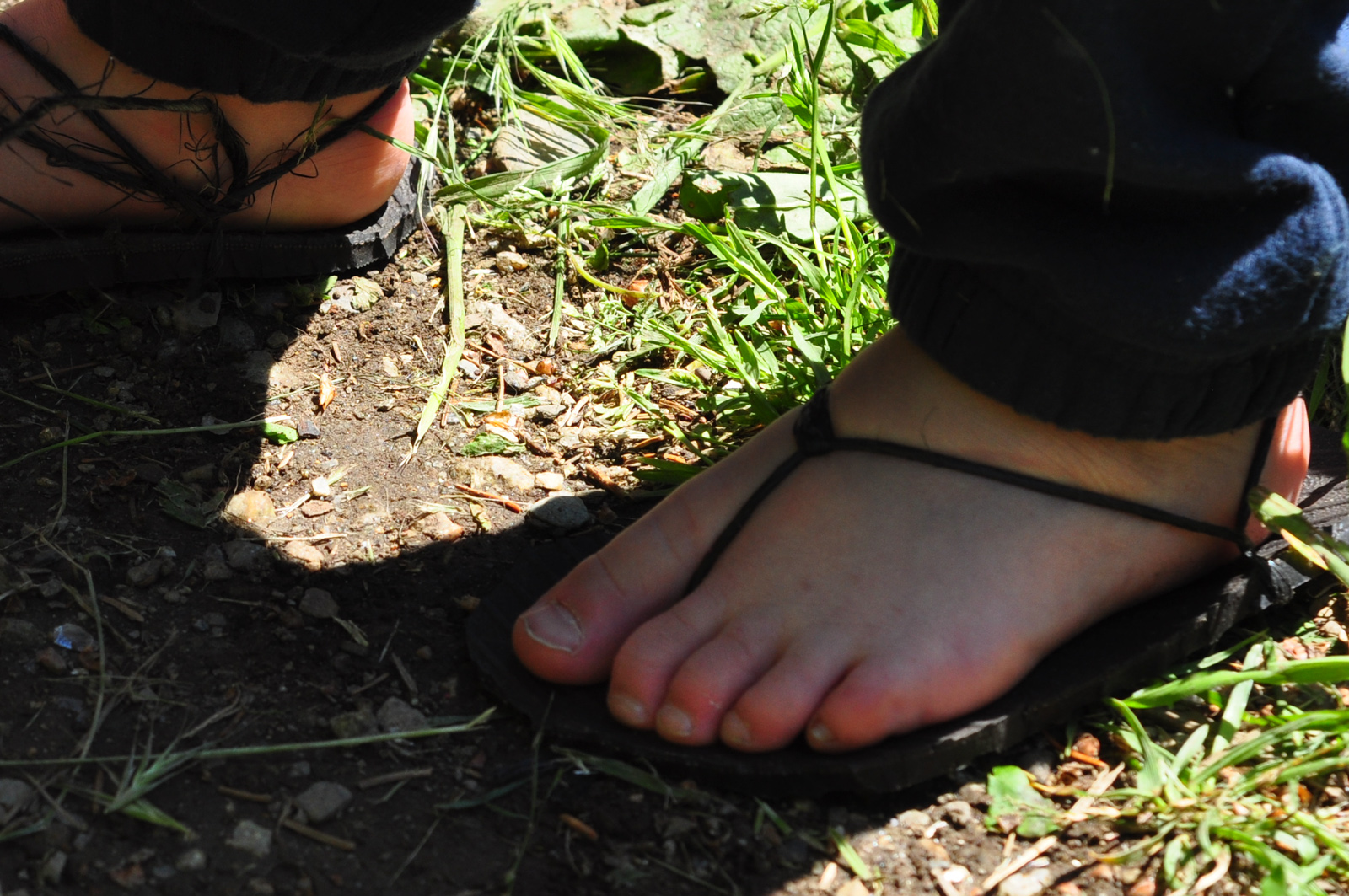 Some time ago, Diego Santamarta casually mentioned that the shoes he was wearing were not regular flip flops, but rather some kind of sandal which I had never heard about. “Oh ok” was my less than enthusiastic answer. In the meantime, and even before, I had been reading about barefoot running, even though I had never run more than a few hundred meters without panting uncontrollably. Yes, 15 years smoking does take it’s toll. After two years tobacco free, I feel I’m only now starting to recover.

Anyway, I had dismissed barefoot running as something that I would love to do — and probably the only way that I would ever run for pleasure — but that seemed very uncomfortable bordering on dangerous. Two days ago, that same Diego Santamarta posts to facebook a link about those sandals as used by barefoot runners to protect their feet on difficult terrain.

I almost immediately started reading about them, watching youtube videos or instructables explaining how to build them. I had an old tire in the growing “to throw away” pile which I never get around to bringing to the recycling center, so that was the main part of the material sorted. I also have some polypropylene cord (the blue one used to tie straw bales and some black one) which could be used as laces. As will be seen later this is not comfortable nor durable so I used some more elaborate string for the laces.

Trace your foot on paper and locate the holes as indicated in one of these guides.

Now the real work begins. We will need to hack at that tire, and it truly is tiresome work. I had some tin snips on hand which I thought would be perfect for the job. They are in fact totally useless. I did the job with a hacksaw to cut through the metal ring where the tire meets the wheel, and then one of my trusty Opinels to cut through the reinforced rubber outwall. If the knife is kept sharp, this is actually fairly easy work. 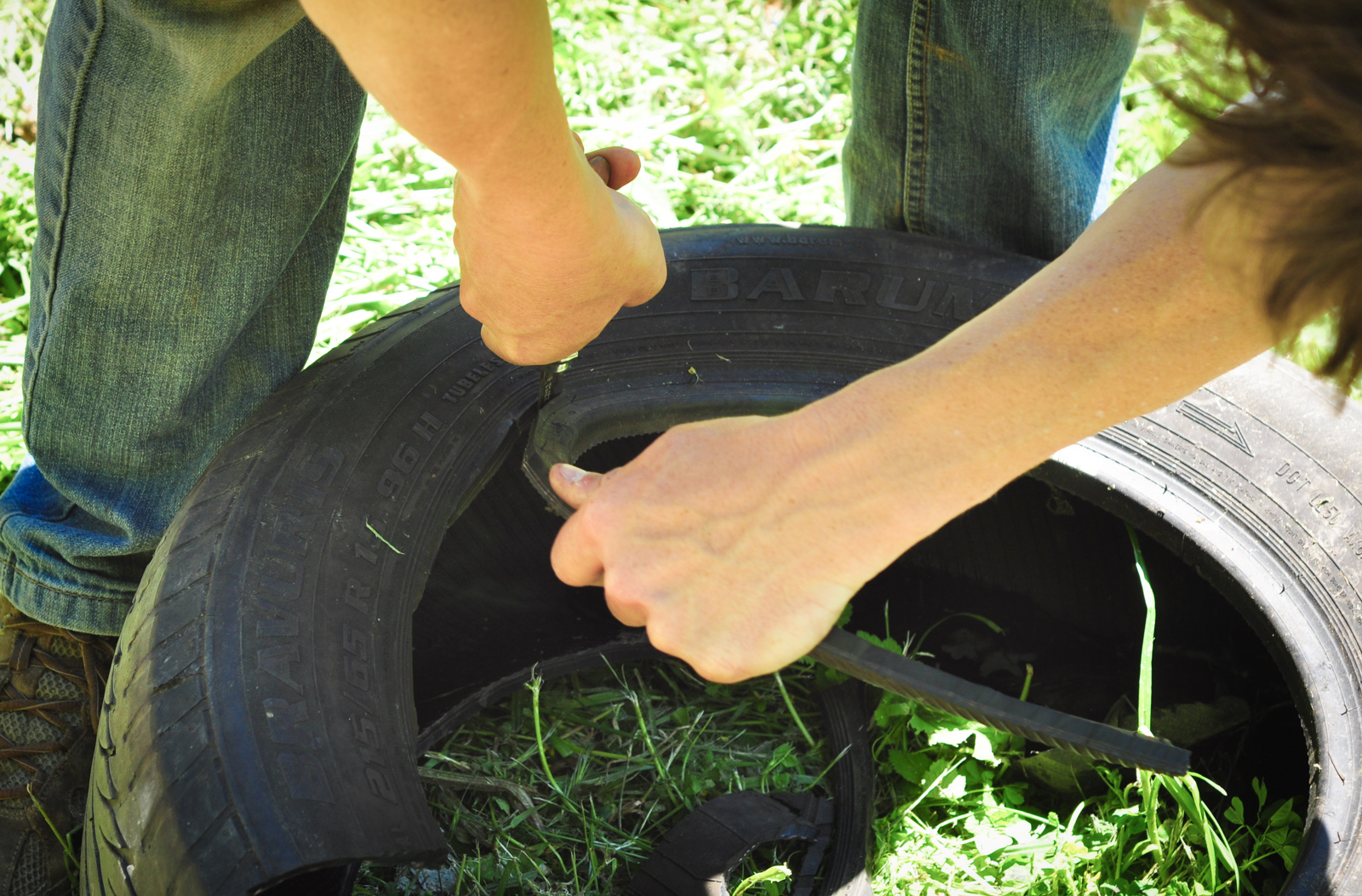 I cut some rough pieces from the outerwall, one from each side of the tire to match the curvature of the outerwall to the natural curve of each foot.

You then trace the outline of your paper pattern on the pieces you just cut, enabling you to have perfect tire soles for your huarache sandals. 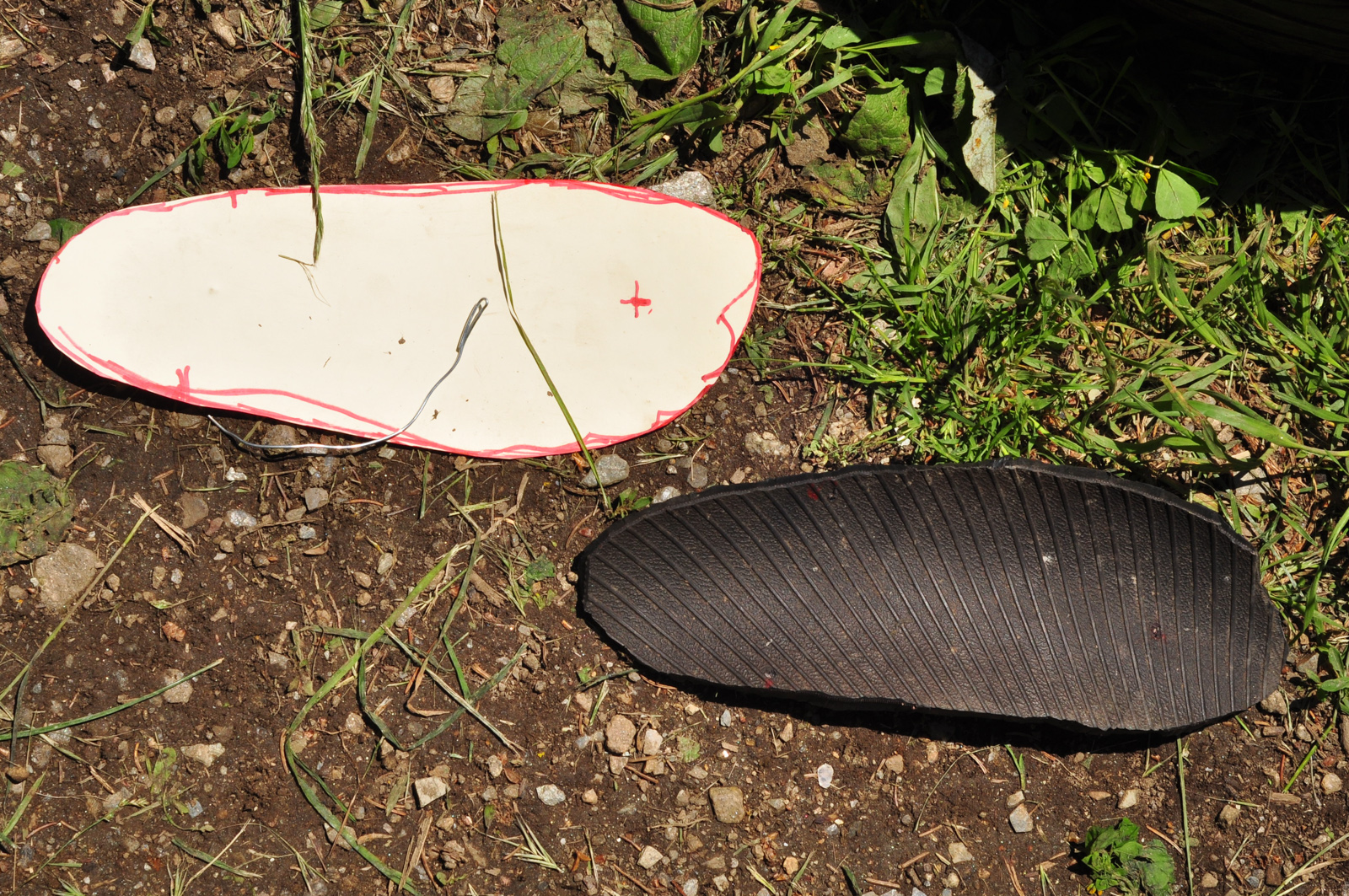 I then used a small drill bit, around 5mm to drill the holes.

Putting the laces in places

The are many lacing systems that can be used, the one I used seemed simple enough, and can be slipped on and off easily.

To pull the string through the holes, I used a piece of bent wire as a threader, and pliers to pull on it if need be. A figure of 8 knot locks the string in the toe hole. the string then goes throught the outer hole, around the heel, through the inner whole, and ties around the front part of the lace 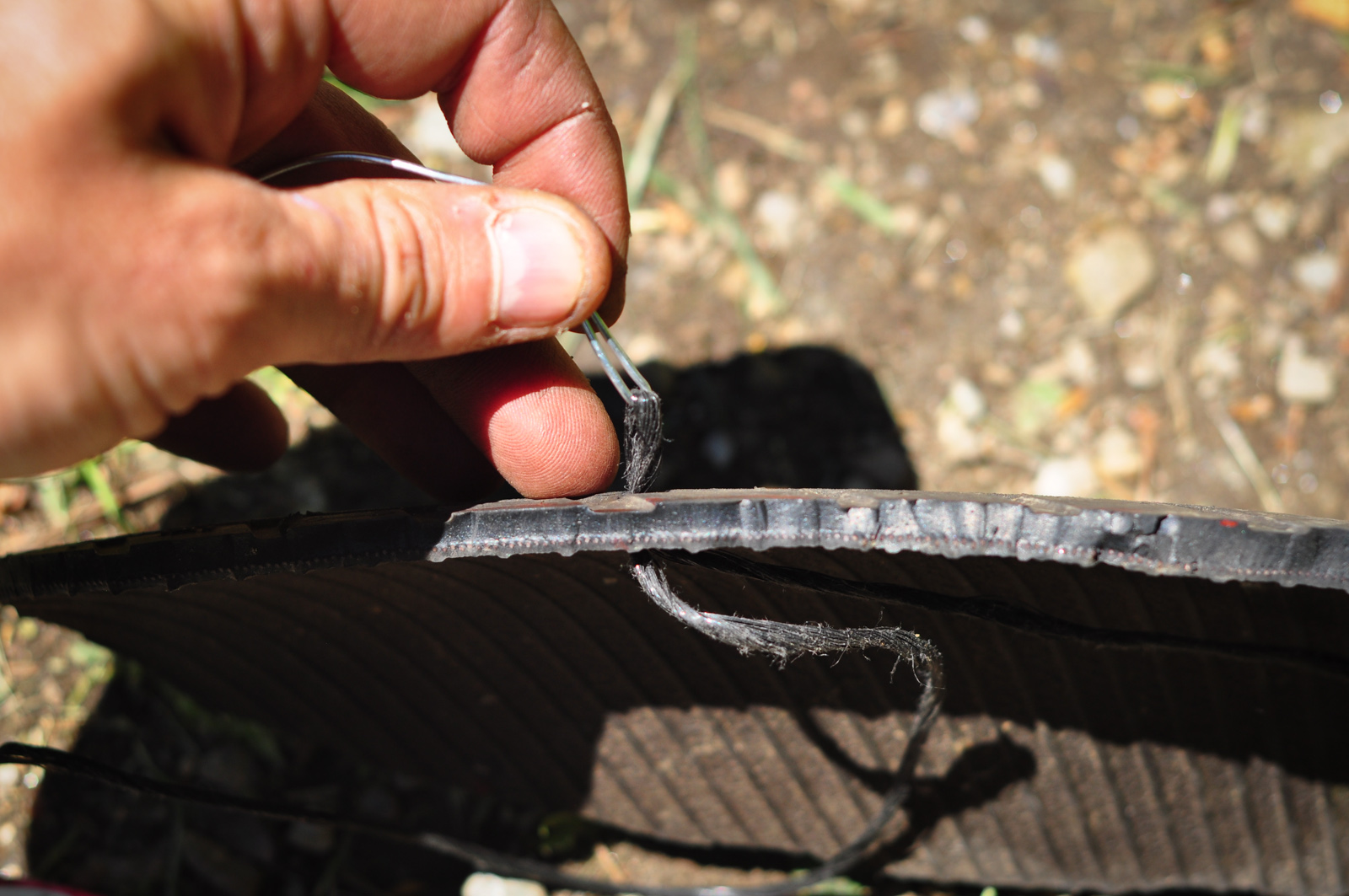 Here is the result: my son’s sandals. He complained that they were not very comfortable though, so I changed the cord (which was too thin) and used a thicker braided one I had around, which is much more comfortable.

Once everyone had their sandals ready, I decided to go for a short run to try them out

Please keep in mind that I was a heavy smoker for many years, have never run unless obligated to, and never more than a few hundred meters.

The first segment was downhill, and I had to readjust the shoes almost immediately, for the only time in the entire run.

When I arrived at the first uphill segment I got out of breath quickly and decide to alternate running and fast walking for the rest of the outing. That worked out pretty good, and the running actually felt easier and easier. The shoes are superb. They are pretty comfortable, provide just the right amount of protection to avoid having to look out for every little piece of gravel and can be used to cross streams without fear of them becoming slippery.

My calves started hurting at around the ten minute mark, I think from landing on the front portion of the feet. It only got worse from then on, and now I can barely walk, it feels like I have a continuous cramp in these muscles. The feet are in perfect condition though, I just feel that they have had a good workout.

Can’t wait to go out tomorrow for more!